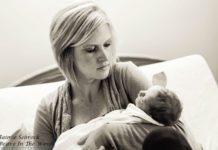 You know what I think birth is important to people. Birth defines humanity. And if you happen to have a Syrian section and your baby’s born very, tiny and he’s in this box for a long time, you love that baby. And you will love that baby. And when you get that baby into your arms plan, you’ll fall in love with that baby, even more so than you have been for those weeks of the baby’s been in there, but it’s different. Oh, and if you’ve found a baby on your doorstep, you would pick up that baby and fall in love with that baby. But when you carry a baby in your body and you give birth to that baby through the process of labor and all the sensations, the sounds, the smells, the, everything, just the whole like amazement that your body actually had this baby I’ve had five.

I still don’t believe it’s possible each time. It’s like, Oh my gosh, you were inside me. No, I don’t believe it. I really don’t. And I’ve been a midwife and I see it happening over and over. It is mine willing to use an old hippie expression, but it really is. It’s awesome and amazing and overwhelming. you see this baby, you are, we don’t hate. We need to remind that we are actually animals. We’re humans. We’re better than any animal the planet. I’m I believe that we are better, but we’re also animals. We have these instincts and our instincts are so powerful. Our instincts say, Oh my gosh, this is my baby. And you ready to fight a tiger to protect that baby. Where normally you would just run away from the target, but you know what? You’re going to punch that tiger in the nose.

If you think that tiger is going to do anything to endanger that baby, he loved that baby. It’s an over-saturation of a hormone called oxytocin. Some people say, “I was like, I was on drugs and I wasn’t even on drugs”, you know, but it is this, this hormone, which is oxytocin. This is the molecular sign of it. It’s what you feel when you’re having a wonderful day. When you you’re with your partner, you’re looking at each other’s eyes. It’s what happens in lovemaking. It’s what causes the sensations, you know of well, there may be children that shouldn’t listen to this part, but the physical sensations that lead to orgasm, those are surges of oxytocin. And those happen during labor as well. So some people actually find labor itself to be a sensual sexual experience. I think most of us sort of here to let you know, as a way bad case of the flu, but, but you’re willing to put up with it because in those last moments as the baby’s born and in those first moments, when you’re holding your baby, it is worth everything.

At least I think so. And I think this is the first stage of the family. We make fun now of the idea of like maternal bonding, paternal bonding, but it really is true. Just like, you know, baby bird hatches out of the shell and he will bond and attach to the first thing he sees. He’ll go chasing after that cat thinking, it’s his mother because the biological program Brits are really stupid. They don’t have much of a brain, but babies, they hear mama’s voice. And I always watched too, because the minute that they hear daddy’s voice a baby, just born lift up his head and turn and look, where was that? And sometimes the siblings voice for those last couple months, they are pre being prepared to bond together. As a family, a family is a basic unit of civilization that families can be, a mother, father, child, or two, they can be aunts and uncles intergenerational.

They don’t necessarily have to be gender specific. They can be really good friends, but the family forms the basis of the neighborhood and the tribe, the culture, the nation. And I will work to support anybody’s family because I know how important the family is when we lose that focus on the family. We’ve lost the focus on us up as a civilization. So I think that birth itself was important. I think that a child with physiological childbirth, if it can be done is important. And I think that if someday we can develop a process where we take the little bitty babies and put them in a bottle like in brave new world. I think it will be a brave new world, but not necessarily a good new world.