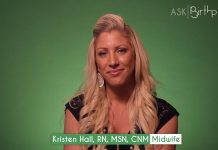 ASK: What types of labor positions could I be in for my labor and birth? 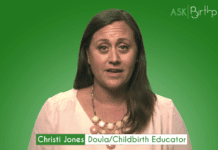 ASK: How does the uterus work while in labor?

Lots of moms are curious what it means when someone like their care provider, their midwife, or their doctor says that they’re dilating. It’s kind of an unfamiliar term, so I think it’s really helpful to look at what the uterus does and how it dilate so you can better understand what they mean when they say you’re dilating in labor. I’ll show you what it looks like with a knitted uterus. The uterus is shaped like a balloon, kind of like the party balloons that you would have for any kids party. The top of it where the dimple of the density of the balloon is, is called the fundus. The middle is just the body and the tight neck of the balloon that comes together and long and thick is called the cervix. As you’re getting through labor, each contraction of the uterus is literally pulling these fibers shorter and shorter and shorter so that they will take on the shape of the uterus.

That first step is called effacement, but once the uterus is flat up against the baby’s head, the cervix begins to open and we call that part dilation. Dilation is measured in fingertips (not like a slide ruler or like you know something more precise) and the doctor will just try to slide a finger in and if one finger fits in, they’ll say you’re about one fingertip or one centimeter dilated. If the doctor and midwife can slide in two fingers, they’ll say you’re either two or three centimeters and they just mean that they put in two fingers and they really couldn’t spread them much further. After that. They just begin spreading their fingers and gradual increments so that they’ll say “oh, you’re three to four centimeters or five centimeters.” What they’re telling you is they were able to spread their fingers about that far before they bumped up against the edge of the uterus.

When they no longer can feel any of the cervix or any of the uterus. When they’re doing an internal exam, they’ll tell you that you are 10 centimeters or complete and that just means that the baby’s head is ready to leave the uterus and enter the birth canal. So you’re finishing stage one or what we call “labor or moving into stage two,” which is pushing or the birth of your baby. You can’t see on this model that the next part would be happening through the birth canal, which when you’re not pregnant, we call the vagina. So when you’re 10 centimeters, you won’t actually see the baby’s head like you do on this model. The exam would be done through a long sleeve called the birth canal. So they’ll be reaching in and going like this. And when they no longer feel the baby’s head in any direction, they’ll tell you that you’re ready to birth their baby. So dilation is the process of changing your cervix from long and thick and closed like the end of a party balloon all the way up till it’s open around the baby’s head. And you’re ready to birth your child.