29 POSTS 0 COMMENTS
http://www.virginiafertilityassociates.com/
Dr. Anish A. Shah believes in patient-centered fertility care. Before arriving at the Richmond Center for Fertility, he was on the medical staff at Duke University Medical Center. While at Duke, his patient satisfaction scores (Press-Ganey) were consistently in the top percentile among over 500 physicians. In Richmond, from the very first year he arrived he was featured as one of Richmond’s “Top Docs” and has been in it ever since his arrival. OurHealth Richmond magazine voted him the doctor with the best bedside manner. He credits this achievement to his philosophy that “every patient is like a member of my family.” Dr. Shah brings you the experience of a world-class institution. At Duke, his primary focus of research was improving fertility care by reducing miscarriages and improving safety. He also obtained a master’s degree in Health Economics and Clinical Research from Duke University. His research and publications have ranged from understanding how to reduce twining and high-order multiples from IVF to the optimal number of oocytes (eggs) to obtain from IVF balancing risk and benefits. Education Background Dr. Shah grew up on the coast of North Carolina. He obtained his undergraduate degree in Public Health from the University of North Carolina at Chapel Hill with honors. After working in Nicaragua trying to improve the healthcare of women and children, he attended the Medical College of Virginia in Richmond for his medical degree where he was awarded a scholarship. He then completed a residency in Obstetrics and Gynecology and a three-year fellowship in Reproductive Endocrinology and Infertility at Duke University. He was awarded multiple teaching awards and as a chief resident was asked to participate in the first single-incision laparoscopic procedure in the southeast. He is board certified in both Obstetrics and Gynecology and Reproductive Endocrinology and Infertility. He is a Fellow of the American College of Obstetrics and Gynecology (FACOG). Fertility Specialist Dr. Shah specializes in assisted reproductive technologies (i.e. IVF and ICSI), pre-implantation genetic diagnosis (PGD) and screening (PGS), third-party reproduction (donor eggs and embryos) and complex minimally invasive fertility surgeries. He worked closely with medical genetics at Duke to create a more comprehensive approach to reproductive genetic care including comprehensive chromosomal screening (CCS) evaluation of embryos, which reduces miscarriages. During his almost 10 years at Duke, he trained with some of the nation’s leaders in minimally invasive surgery (laparoscopy, robotic surgery, and hysteroscopic surgery). As a researcher, Dr. Shah has received many awards including the prestigious investigator award at the Society of Gynecologic Investigation Conference in 2010. Ultimately, his efforts led him to be the first member of the Duke Department of Obstetrics and Gynecology to receive a $200,000 Health Services Research Fellow award provided by the National Institutes of Health (NIH) to train to improve quality of care in fertility care. In addition, he has authored numerous papers, abstracts, and lectured extensively on topics relating to fertility and reproductive endocrinology. Memberships & Associations Dr. Shah is a member of American Society for Reproductive Medicine, the Society of Reproductive Endocrinologists, the Society of Reproductive Surgeons, and the Society for Assisted Reproductive Technology (S.A.R.T.). He is on the Medical Staff at Virginia IVF & Andrology Center and Henrico Doctors’ Hospital. In his spare time, Dr. Shah enjoys hiking, running, scuba diving, and spending time with his wife, son and daughter. 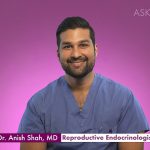 ASK: What are the latest medical breakthroughs in fertility treatment?

Conception Dr. Anish Shah
Latest Medical Breakthroughs In Fertility Treatment “So you're kind of thinking about fertility and you're wondering what's out there and what's the newest thing out...

ASK: What is IUI?

Conception Dr. Anish Shah
What is IUI - Intrauterine Insemination? “So you're thinking about doing IUI. Intrauterine insemination is basically when a fertility expert take sperm that he is...

ASK: What is IVF?

ASK: What is ISCI?

Conception Dr. Anish Shah
What is ICSI? “Exceed intracytoplasmic sperm injection. If your doctor's asking you to do it. See, you probably asked to do this because he wants...

ASK: I’ve had more than one miscarriage, is it still possible to have a...

Conception Dr. Anish Shah
Pregnancy After Miscarriage “If you've had more than one miscarriage, you can absolutely still have a baby. The reality is that you have a 70%...

ASK: I want to do fertility treatments but I’ve heard i could end up...

Conception Dr. Anish Shah
Am I Going to Have Twins? “You're thinking about going to see a fertility expert and you're, the first thing that I know is going...

ASK: What is PGS or preimplementation genetic screening?

ASK: If my partner takes testosterone, can that play a part in my infertility?

ASK: How do hormones play a part in my fertility?

Body Functions (conception) Dr. Anish Shah
How Hormone Pills Help Improve Fertility? “So when you see a fertility doctor, you are, you might need to use some hormones. These might mean...
123Page 1 of 3